Rules of 3 for Survival

Those who venture into the great outdoors should, at a bare minimum, know the survival rules of three.

A friend told me a story about getting lost with a dozen people and horses on a horseback trip in the Appalachian mountains. They were only lost for a short time, but could not get back to the trail head before dark, so they had to spend the night on the trail. They were not prepared to spend the night, so they were tired, miserable and hungry. But the Summer weather was forgiving, so as long as they had water, as long as nobody was missing critical medications and nobody got injured, they were never in any real danger.

A common theme to survival situations is that people find themselves in a place and at a time they didn’t expect, and that is exactly what happened to these ill-prepared trail riders. They were guilty of making the assumption that they would get back to civilization before dark and only planned accordingly. They didn’t have extra food, most didn’t have clothes for night time temperatures and not a single person had a flashlight.

As I remember the story, one guy had plenty of beer stuffed in his saddle bags, several guys had hand guns and several more had cigarettes, but more importantly, they had cigarette lighters.

The part of the story I found most interesting was that some people were talking about killing and eating a horse the first night. Knowing how attached horse people are to their horses, I laughed when I heard this and assumed my friend was joking. They assured me they were not joking and that some of these people were really concerned about dying from hypothermia at night if they didn’t eat.

Hard to believe. Sure, calories in the belly will help generate heat, but you can’t eat enough to stay warm if you aren’t sheltered from the cold. How could someone really get the priorities for survival so wrong?

Survival Rule of 3 and Survival Priorities

For real survival situations it is better to remember and prioritize by the four levels of the Survival Rules of 3:

The main point of the Rules of 3 that we have to concentrate on the most immediate problem first. I am mainly thinking about survival in an outdoor/wilderness context, but  a survival situation is a survival situation no matter when or where it occurs and these rules/points/priorities are still applicable. There is no need to think about food if the main threat to your survival is hypothermia because your clothes are wet. And make no mistake, if you are shivering and can’t get dry and warm, you may not able to function after three hours. If you are alone, you may have only about three hours to live.

We're not around right now. But you can send us an email and we'll get back to you, asap. 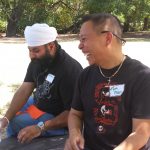 Emotional ResilienceUncategorized
During the winter season it is important to be prepared for the unforeseen, and many of those moments happen in automobiles. Here are some tips for staying prepared during holiday season travels.Uncategorized